You know, I just realized I never got around to posting my review of Oreimo. Well, enjoy. 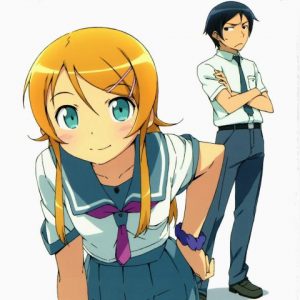 My biggest surprise in recent (read: 2014) anime discoveries has been Oreimo, a.k.a. My Little Sister Can’t Be This Cute. I had written it off as borderline wank material but my brother kept insisting I should try it out. And yes, there’s fanservice, but not the sexual kind (okay, there’s a gratuitous panty shot in the second episode).

The series is one of the few anime that shows being into geek shit is actually not a mainstream thing in Japan. The fanservice, then, is in the show’s depiction of the little sister as the ideal otaku: well-adjusted, popular, and good-looking. Actually I can see that she’s more like the otaku’s ideal girlfriend, like an independent invention of that male nerd fantasy – the girl geek. And there’s even an episode where the sister defends her hobby to her judgmental father.

The fantasy of the series, the yearning that informs every episode, is the desire for acceptance. Well, there’s also the fantasy of a girl who appreciates the misunderstood target audience, which I will acknowledge as not a fantasy I care about. But once you can see what the series was going for then perhaps you might be able to appreciate the story for itself.

As always, your mileage may vary.

I have since been informed that the anime takes a jarringly squicky turn near the end. Heads up for all you watchers out there. For now, I’ll stand by my recommendation, as being 80% good is still an A in most grading schemes.