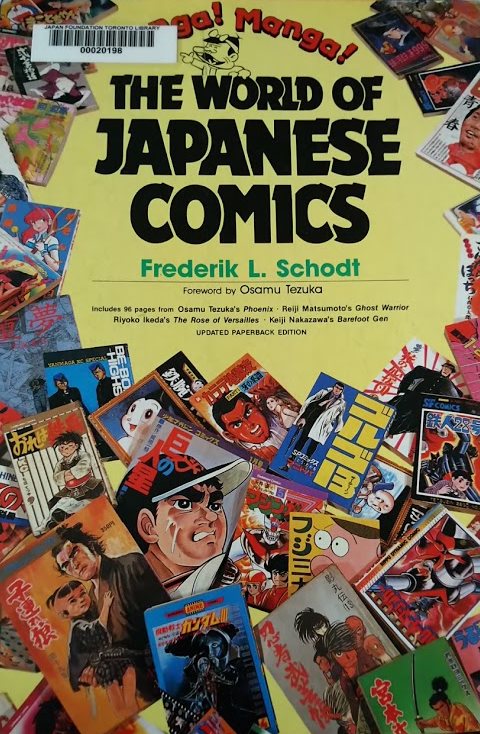 Thanks to the Japan Foundation, I’m reading Manga! Manga!: The World of Japanese Comics by Frederik Schodt (and if you want to know what the Japan Foundation was like I tweeted about it here). It was published in 1986, well before the manga boom of the mid-90s. Or was it the late 90s? I can barely remember a time when manga wasn’t the default comic book format for the majority of readers, at least in terms of sales.

So the book was written in a time when only specialists in Japan and the most dedicated of comic book hipsters knew anything about Japanese comics. It therefore explains manga from the ground up, going through its history and providing examples of manga of each era and type (mangas from the 50s, boys’ manga, girls’ manga, etc). It does the same thing that many comic book histories do in locating the origin of this mass market disposable entertainment in antecedent forms with greater cultural cachet but weak connections to the medium (i.e., I’ve seen people arguing that the Bayeux tapestry is also comics in that it combines pictures and words to tell a story). I understand why the comics historians do it, they’re trying to impart greater respectability to their medium by connecting it to older and more respected media, but I dunno, I think it’s more productive to define the medium by its relations of production and it stops you from going down ridiculous formalist arguments about whether magazine cigarette ads count as comics.

Moving on, I hadn’t realized I knew so much about manga as I’d already heard of quite a lot of apparently obscure works, or at least they were obscure back in the 80s. Time marches on and Rose of Versailles, for example, has an anime that I watched on streaming a few months ago. And of course there’s the scanlation community, which has probably done as much to spread knowledge of manga as any official initiatives from various industry groups.

The last chapter deals with manga’s future and in hindsight it completely failed to anticipate the explosion of overseas interest in the medium just ten short years later. In fact, it basically says that manga will probably remain a mostly Japanese thing, instead of something French schoolkids save their allowances for and whatnot.

Anyway, it’s an interesting snapshot of a specific moment in time in manga’s history.

I saw Logan and was moved. A superhero movie made me feel something besides glee when the bad guys got their asses kicked! This is unprecedented. That final X almost brought me to tears. I saw the movie twice in the theatre, which is something I very rarely do.

You know, in the comics whenever the X-Men travelled to the dystopian fascist future it always looked ridiculous and cartoonish, whereas in this movie it’s almost painfully plausible. The Guardian‘s review called Logan “a feral howl of rage”, which pretty much is the prevailing mood in a lot of the US today.

Yet this movie was made while Obama was still president, and let’s not pretend Hillary would have done more than half-assed work in reining in the neo-feudal society the obscenely wealthy keep trying to bring about. It’s like Aliens vs. Predator said: Whoever wins, we lose.

Logan is many things, but one of those is a cri de coeur. I recall what Marx said of religion:  “[It] is the sigh of the oppressed creature, the heart of a heartless world, and the soul of soulless conditions. It is the opium of the people”. For good and ill, one can also say that of art. 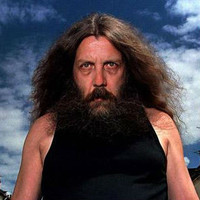 Yesterday was Alan Moore’s birthday. Yesterday was also when I learned that there is a Japanese doujinshi (i.e., a fan comic)  which answers the question, “What if Alan Moore were a teenage schoolgirl?” 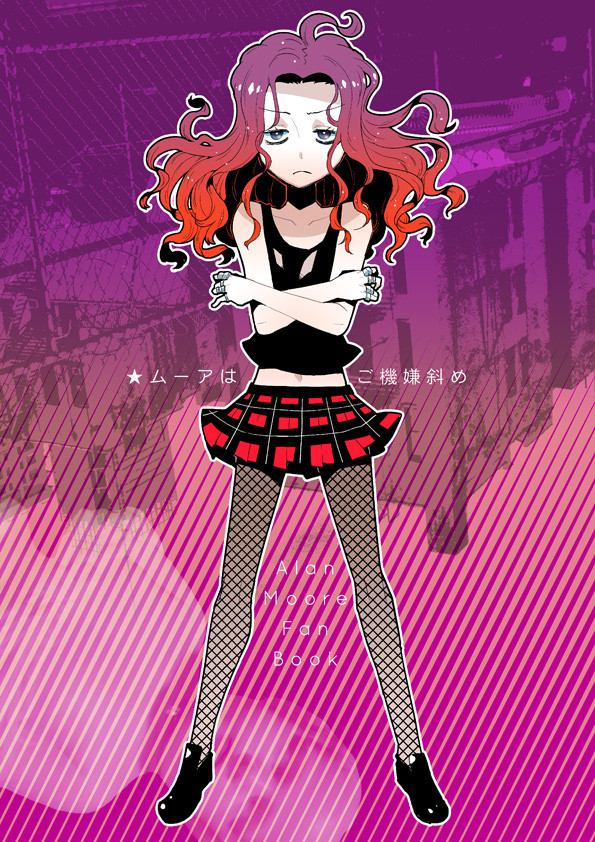 The comic is only a couple of pages but it additionally answers the related question, “What if Neil Gaiman was also a teenage schoolgirl?” I believe this comes under the heading Real Person Fiction (RPF), which is a thing I don’t understand at all. Every time I think I’m getting a handle on fan culture I come across yet another weird-ass thing like this.

I’ve noticed that a lot of manga that I like were initially published by BEAM COMIX (rendered as Comic Beam in the linked Wikipedia article for reasons I can’t ascertain).  It’s a magazine that serializes manga mainly targeted at an adult male audience.

It seems to me, judging from their published titles that I’ve enjoyed, that the publisher releases offbeat works with unique premises that are compellingly readable. What have I read of theirs? Let’s see, there’s the magical realism of Ran and the Gray World, the character-driven kitchen sink comedy of Hinamatsuri, the indie comic action of Bambi and Her Pink Gun,  the anthropological detail of A Bride’s Story, the science fiction violence of Immortal Hounds, and the adventure comedy of Dungeon Meshi. This is an all star line-up.

According to the ol’ Wiki, the magazine is considered by many as focusing on “alternative” manga, which from context sounds like the Japanese equivalent of indie comics. It has a very small readership of 25,000 but consisting largely of hardcore enthusiasts and art students. To my mind, BEAM COMIX’s readers would probably be the type to own copies of Understanding Comics (the comic book bible) were they to live over here instead. In fact, quite a few of the magazine’s Japanese audience probably do own copies of Understanding Comics themselves.

Whatever they’re doing, BEAM COMIX is doing it right. Their editors know how to pick a winning story. I’m going to keep an eye out for their other stuff from now on.

I just watched all the episodes of Your Lie In April that have been broadcast so far. I rather liked this teen-romance-between-classical-musicians thing. At first I was afraid it would be too much like Nodame Cantabile, where a free-spirited pianist slowly teaches her fellow student how to appreciate music again, but this show is different enough to be interesting on its own (nice shout-out to Nodame, by the way). Anyway, I don’t really have a review so much as a bunch of scattered thoughts.

First, there’s a lot of crying on this show. Do classical musicians cry this much in real life?

Second, I had no idea that Peanuts was that widely read in Japan. Teenagers can actually quote Charlie Brown out of the blue without having to explain where the line is from? Although “I’m not always going to be around to help you” sounds more ominous in the show.

Third, I think the book that the protagonist is reading in one of the early episodes is The Little Prince. The illustration on the cover looks familiar.

And fourth, I can’t tell the difference between a good or bad performance in classical music. Well, maybe if something was egregiously terrible and dissonant, but otherwise I have no idea what the characters mean when they say one rendition is rough and another is full of honest yearning. This reaction is to be expected, of course, since classical music is an elite pastime specifically meant to exclude those without the proper background, but what that means is that I’m watching the show for the characters instead of the music. I do kind of want to take up piano again, though.

Addendum: Based on further research (i.e., asking people who can read Japanese) the book in question is actually The Genius Liar by Ulf Stark.

Everyone, meet your new Jessica Jones: Krysten Ritter, the bitch from Apartment 23! And Michael Colter is the frontrunner for playing Luke Cage. I’m not familiar with him, but I lurve Don’t Trust the B—- in Apartment 23. Possibly Ritter may need to bulk up a bit to play our washed out superhero, but she’s certainly got the comedic timing for the funny bits, and her turn as Jesse Pinkman’s drug addict girlfriend in Breaking Bad shows that she’s pretty good at this drama thing too.

It’s interesting to look back on my posts about the TV adaptation of Alias. The earliest rumblings of such a thing were back in 2010, meaning that it took at least five years, and probably a bit more, to get this show from being a vague idea to something that shows up on your TV screen. I wonder, is that the normal development timeframe?

Announcement: the Alias Omnibus is being reprinted in November! You don’t have to feel stupid for not buying it eight years ago! I suppose Marvel wants to prime the pump for the upcoming Netflix TV show.

I posted quite a while back about the Alias comic book series being developed for TV. The series is about a superhero washout lurchingly eking out a living as a private detective in New York. The comic book was actually heavily influenced by Sex and the City, of all things, what with its foul-mouthed protagonist living the single life in The Big Apple.

Anyway, the news about TV show was all the way back in 2010 so I was afraid that deal fell through like so many things in the entertainment world. But guess what? Netflix is producing the Jessica Jones series along with TV shows for Daredevil, Luke Cage, and Iron Fist.

I’d been wondering why the street level superheroes were absent from Marvel’s Agents of SHIELD (and may I remark that I greatly dislike the unnecessary reminder of which company owns the franchise in the title of the show?). It seems like a no-brainer to have low-ranked costumed vigilantes in a TV show. The kind of superheroes who fight bank robbers and purse snatchers instead of alien menaces or vast armies of evil minions are also the kind of superheroes who don’t have flashy powers that would be expensive to fake decently on a TV show’s budget.

So it turns out Marvel was saving Stilt Man and The White Tiger for these TV shows. I’m just hoping they’ll be able to do something like what Arrow did for DC’s street level characters, because then I might die of a massive nerdic superhero overload.

Or the shows might turn out to be like House of Cards but with superheroes. Which would still be pretty entertaining.

One year ago, I decided to track how many books, movies, TV shows, and comics that I consumed. That project has now come to a close. What have I discovered?

First, most of what I read is science fiction and fantasy. Overwhelmingly so, actually. Second, I have a tendency to binge watch on TV shows. Third, when given a choice between watching a two hour movie or four 30 minute TV episodes, I will watch the TV show because for some reason I’m daunted at spending two hours on a single leisure activity. Fourth, I read a staggering amount of comics. Last, I kind of wish I watched more movies.

Anyway, the final tally is below.

And in case for some reason anyone out there is curious exactly what fiction I consumed, here’s the list I made.

Are you tired of having to comb through dozens of articles trying to figure out if DC Comics has done something cringeworthy today? Would you like to be the first person to know how long it’s been since DC’s alienated fans, minorities or people with discerning taste? Do you like regularly experiencing schaudenfreude at the expense of a major corporate entity?

Well, The Outhouse has the solution for you!

Has DC Done Something Stupid Today? is your one stop source to see how long its been since DC fucked up.

Read more about DC’s PR goofs at The Outhouse.