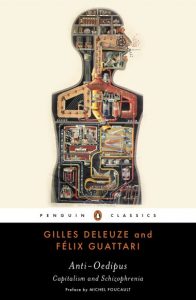 I am reading Anti-Oedipus: Capitalism and Schizophrenia by Gilles Deleuze and Felix Guattari. Technically I haven’t actually started reading it yet and have only finished reading the preface by Michel Foucault. Mostly I’m reading it because a lot of Deleuze and Guattari’s ideas were explored thematically in the Ghost in the Shell anime and I’d wanted to read it before actually watching the movies and shows. I think the book itself has been on my Amazon wishlist for eight years now.

It seems to be about using the schizophrenic’s break with (capitalist) society as a roadmap to how to live outside of capitalism and its inherently fascist tendencies. It’s kind of hard to read a theory book once one is no longer in academia as I’m no longer in the headspace to easily parse a translation of a densely written neo-Marxist monograph. That, and there are just too many options for amusement available to me.

Speaking of which, I’m also reading another – and more accessible – translated work known as The Devil is a Part-Timer series. It’s a bunch of Japanese light novels about the Devil being kicked out of his kingdom and escaping to modern Japan, where to make ends meet he has to work part-time at McDonald’s. It’s frequently hilarious.

I keep these books at home, though, and when I’m commuting I pull out my Kobo and read Brandon Sanderson’s Mistborn: Shadows of Self, which is set 300 years after the end of his Mistborn fantasy series. While the original trilogy was essentially a decently fresh take on a fantasy trope, being about a world where the destined hero failed and the land is ruled by the evil emperor, this series is kind of a fantasy Western about supernaturally powered lawmen and criminals playing their games in a mix of the Wild West and Victorian London.

I like it okay. Sanderson’s writing has definitely improved since his first book, Elantris, though it’s still not going to end up studied in creative writing classes. But the book is entertaining enough.