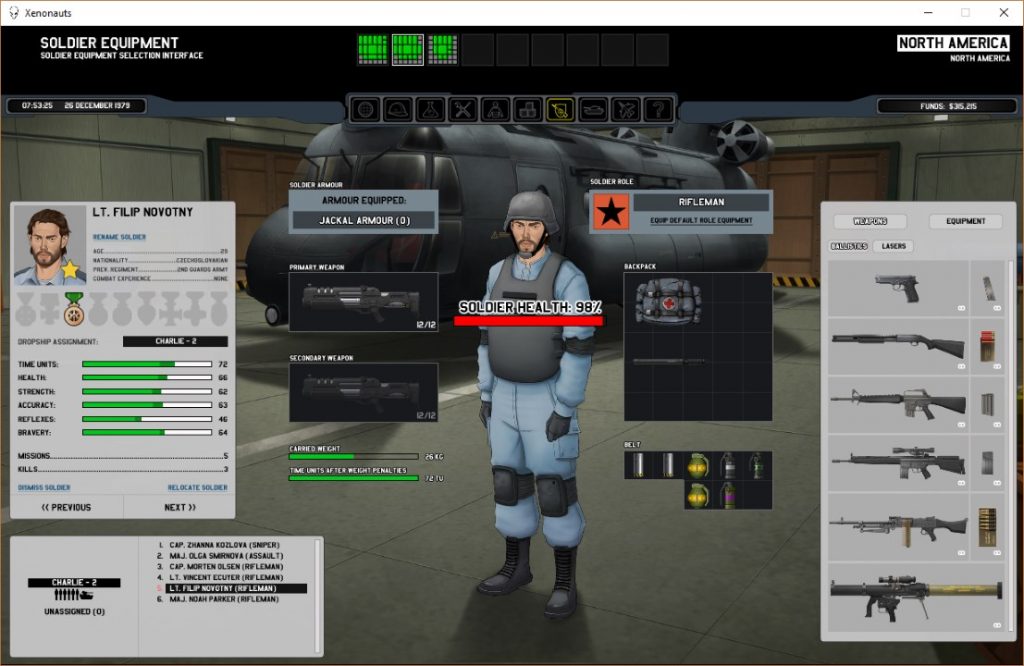 Damn Xenonauts. I was going to spend the weekend playing Skyrim but ended up playing this game instead. It’s just as compulsively addictive as the original X-COM from the 90’s, except with a little bit nicer graphics. According to the manual, the biggest difference I can see is that your soldiers will not get psychic powers. I wish they’d played up the Cold War 70’s aesthetic more, since it’s kind of neat that your alien-fighting organization is a joint Soviet/NATO operation.

Just like with X-COM, I’m mentally revising the dollar figures to add three extra zeroes at the end. A budget of $1.5 million makes no sense for running military bases on 3 different continents with fighter jets and helicopters and dozens of soldiers and scientists and engineers, but $1.5 billion is real money. Body armour at $28,000 apiece is peanuts to a bloated military budget, but $28 million per soldier for armour that can stand up to plasma rifles sounds plausible.

One criticism I have is for something that also happened to me with the original X-COM – occasionally there’s some weird glitch that lets enemies shoot through walls. It only happened the one time, and normally I just play on with troop losses since I like the feel of a desperate fight against an alien invasion, but that was just unfair so I reloaded the autosave.

I was originally going to recommend this game, but I’ve now reached the grindy part of Xenonauts where I’m scrambling jets and troopers every couple of days to repel alien incursions. All the missions are starting to look alike and I can’t tell if the latest city being terrorized by aliens is one I’ve been to before. Was 90s X-COM this grindy? My budget is perched on a razor’s edge and one KIA will put me in a downward spiral of fiscal and planetary doom. These spreadsheets will be my death.