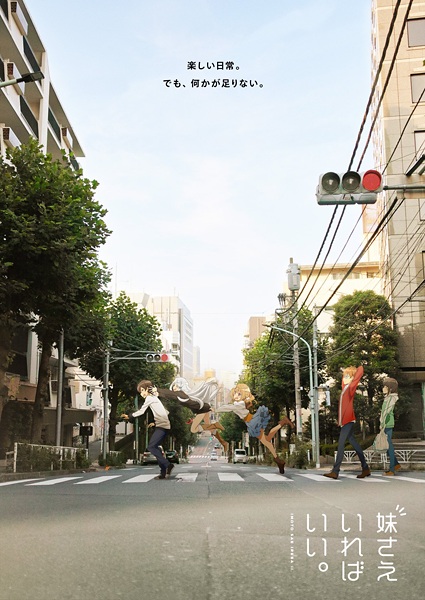 A Little Sister’s All You Need reminds me a fair bit of Oreimo (a.k.a. My Little Sister Can’t Be This Cute) in that watching it reveals unexpected depths that are not captured by a mere plot synopsis or trailer. The bare facts are as follows: this comedy tells the story of a 20 year old light novel writer with a strong and irrational sexual fetish for little sister characters. He – thank god – does not have a little sister, but a teenage step-brother, a very small handful of friends, and an editor who rides his ass about meeting his deadlines.

Unlike Oreimo, the show does not even offer an incoherent defense of the protagonist’s turn-on. Every single character tells him that his fetish is disgusting. Despite that, they still associate with him anyway. I suppose he’s decent enough when he’s not loudly bemoaning not having a little sister to have sex with, plus of his three friends, one is a fellow light novelist who’s envious of his talent, another is also a light novelist with the same publisher who is an extreme fan of his work (enough that she’s very frank about wanting to sleep with him), and the last is a former university classmate who probably has a buried thing for him from days gone by. Which is to say that there are plausible reasons for this group of people to be hanging out and this setting is not an aggressively stupid harem anime setup.

Anyway, it’s hard to articulate what this show is and even harder to say what about it appeals to me. I had assumed it was just the latest nadir the anime industry had sunk to (a show about a guy who writes creepy stories about having incestuous sex with younger sisters), but there’s something there beyond the occasional chuckle the show gets out of me. There’s an undercurrent of unrequited longing – not necessarily sexual – that runs through the relationships between this circle of friends. Each of them wants something that they can’t have, and I’m hopeful that the show can continue playing out the trial of Tantalus in the context of Japanese twentysomethings going through life feeling that there’s just one thing missing and everything would be better if they just had what was lacking.

This is what I hope the show will be about, but I don’t actually know if that’s what the show will be focusing on as there were only two episodes up when I watched last night. In fact, I’m still not even sure what the show’s really about. What does it want to say, beyond that it wants to show what happens in the lives of this group of people? I have no idea.

So this is not a ringing endorsement of the show, but a qualified FYI. I think there could be something there and I hope I’ll be proven right.