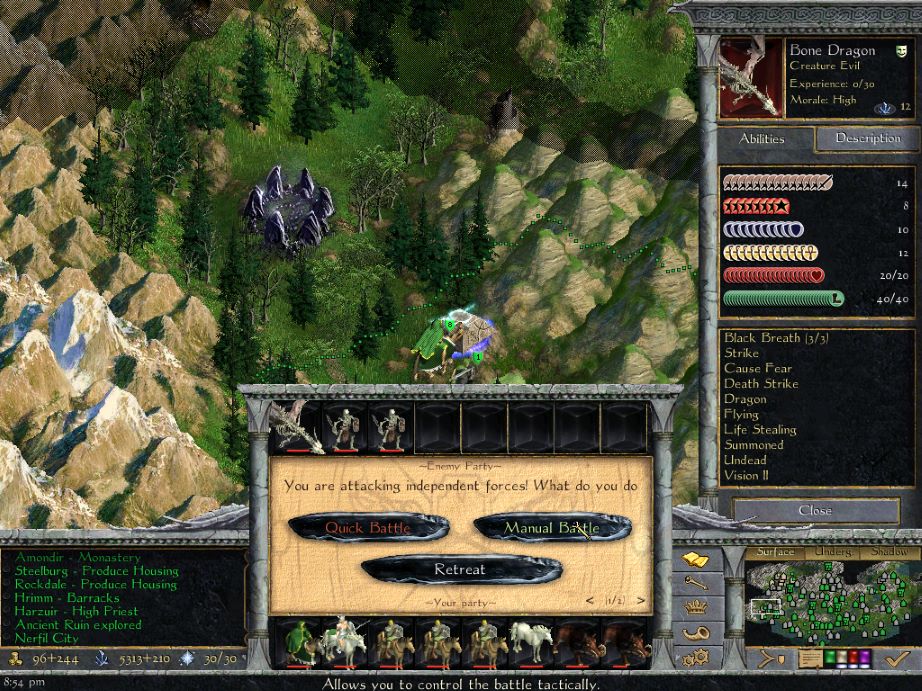 Remember when computer games had crappy voice actors? I do, because I’ve been playing Age of Wonders: Shadow Magic. I got it for like $2 on GOG a while ago and it really does deserve to be listed there, as it actually is a good old game.

The whole thing is kind of like Civilization in a fantasy setting, or maybe a turn-based version of Warcraft. Like Civilization you pick a certain people to play as, you go out into the world, build outposts and cities, gain allies and make enemies, conquer villages, and massacre entire races.

Unlike Civilization, heroes play a big part in the game thanks to its fantasy roots (specifically Dungeons and Dragons with the serial numbers filed off). The player is not some disembodied will directing the manifest destiny of a nation, but instead you are a mighty wizard leading your chosen race to victory over the untermenschen of the world.

I assume you can play as evil races like trolls and stuff but I’ve only done one of the starter campaigns and the story was entirely told from the perspective of the do-gooder elves and halflings. Anyway, your wizard is a unit on the map that you move around, they cast epic spells that can change the face of the world, and they can get their asses killed if you screw up in battle. The best thing to do is probably to stick your wizard in a tower and have them cast their spells from afar.

The race you pick also determines your technology and units, but again with a fantasy spin. The technology tree also deals entirely with getting magic spells that are unique to each race. Elves can get spells to summon unicorns and fairies, for example. Elves also have archers and their higher units are nymphs and druids, while humans have crossbowmen and knights.

The fantasy RPG setting also puts a pretty fun spin on maps because you can send your armies into the tunnels of the Underdark to assault your enemy from the rear, or travel into the Shadow Plane and flank their armies that way. It’s also fun to find random fantasy stuff on a map, like a hidden elf city in a forest you thought you’d already explored or a dungeon you can clear out or an inn where you can recruit a hero or a city that will switch to your side if you rescue them from the demons that besiege them.

Voice acting aside, the game is actually a lot less clunky than you would expect for something from the 90’s. I don’t really notice the interface most of the time, which is pretty much how it’s supposed to work. It’s easy to get sucked in while you’re playing – for instance, I almost missed a social engagement over the weekend because I told myself I’d just finish a map before getting ready to leave. The game is just fun to play and being like 20 years old it’ll run on anything. I say check it out if you like this sort of thing.