Originally posted by me on PodCastle in the Sky

A quick glance at the lineup of a typical anime season will reveal a large number of shows featuring giant robots. In the recent winter season alone we can count among giant robot anime the series Mobile Suit Gundam: Iron Blooded Orphans, Schwarzesmarken, Macross Delta, and probably a bunch more I’ve overlooked. Point is, giant robot anime are like cockroaches and herpes – they keep coming back.

But what’s so great about giant robots? Yeah, I know, to ask the question is to answer it. Giant robots kick ass. I mean, have you seen Robot Jox?

Or Pacific Rim too, I guess.

Fine, but why giant robots? Why not, say, giant tanks, like in Heavy Object?

I think it ultimately comes down to power fantasies. A giant robot perfectly embodies the juvenile dream of invincible domination that a tank cannot. Realistically speaking, a tank is a better weapon. It’s smaller, so it’s harder to hit; it’s cheaper, since manufacturing tank treads is easier than a bipedal walking machine; and it’s safer, since it’s easier to knock over something on two legs than a machine that rides low to the ground. Tanks are pound for pound the deadlier weapon, yet they don’t feel that way.

Consider that riding in a tank is akin to being jammed into a broom closet. Who feels invincible when the walls are pressing in everywhere?

Even were they roomier, though, tanks are fundamentally more like a heavily-armoured house on wheels. It’s a place to hunker down and hide in. One feels safe by virtue of being enclosed.

Look at the image from Heavy Object above of a tank driver in her native environment. It looks like a shut-in’s dream room – no windows or doors and ample monitors to watch TV and surf the Internet. The outside world might as well be just another program on the computer screen. It’s a perfect metal womb to hide in.

Feeling safe, though,  is not the same as feeling powerful. By contrast, a mecha is more truly worn than ridden. It’s human shaped and therefore more of an extension of one’s self – like the perfect battle armour or a second skin, or a new metal body that replaces vulnerable flesh.

It’s also important to remember that the heroes in giant robot anime are all teenagers, even the ones who aren’t. The modern iteration of the giant robot subgenre tends toward the melodramatic and the angst-ridden (as opposed to the gleefully consumerist giant robot shows of the 70’s and 80’s). There’s usually a sense of persecution and oppression being unjustly visited on the protagonists, whether it’s the outcast mercenary troop of Mobile Suit Gundam: Iron-Blooded Orphans or the underdog defenders in Argevollen.

But who are the villains who bedevil our heroes so? The enemies are often generic imperialists who fight for poorly-articulated and nonsensical political objectives. They aren’t fighting for anything specific because ultimately their goals aren’t important to the narrative. They’re just there to be roadblocks, to harass and  obstruct the hero and provide them something to punch.

The enemies of giant robot anime are so generic as to be universal. Look at the nickname bestowed upon the protagonist of Valvrave: The Boy Who Fought the World. This says it all. The enemy of the giant robot anime is no one specific, but rather everyone. Parents, teachers, bullies, rivals, friends, classmates, adults – which is to say, the generic “they” that persecutes the suffering hero of the show – are all the bad guys. They’re who he’s fighting against.

The giant robot pilot is like the Incredible Hulk – he wields incredible power but is misunderstood by the world. In the end, Hulk, like a surly and emo teenager, just wants to be left alone. 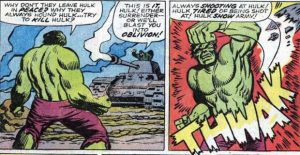 And here we come to the ultimate answer. The giant robot anime is the perfect teenage fantasy, for it’s a metaphor for the teenage condition: an innocent hero is possessed of unwanted new abilities which cause him to be unfairly beset on all sides by powers desperate to control or crush him.

This is the secret of why giant robot anime is so eternally alluring. Even adults who have their shit together will still occasionally feel like the world is picking on them for no good reason, and wouldn’t it be great if you had a magic wand that could make everything disappear? That could stop the world from pissing on you for just one damn second?

Why do we love giant robots? Because we all wish we had one of our own.